There is a “Magic Number” associated with the Maryland Child Support Guidelines and that number is 128.

Custody Lawyers in Frederick County, Maryland will explain to you that when child support is calculated there are two forms, templates or formats you can employ in calculating the Maryland Child Support Guidelines.

The single distinction between these two formulas is the number of overnights the child(ren) spend with the “non-custodial parent.”  When we refer to people as the “non-custodial” parent it is an outdated term, particularly when we are talking about cases that one parent has 183 overnights of the year and the other parent has 182 overnights per year.  Nevertheless, those are the terms in the statutes and the worksheets, so there you are.

Application of the Primary Custody worksheet is appropriate where either of the parents’ overnights with the child(ren) are LESS than 128.  The Maryland Annotated Code expresses shared custody as more than 35% of the overnights and that percentage equates to 128 or more overnights.

Now, this rule of 35% is hard and fast.  While the mantra of the Maryland Family Law Court is to “do equity,” this rule of 128 works a pretty rough and arbitrary justice upon a parent who has the child(ren) a significant part of the time but still less than 128 overnights.  Consider the following.

Now, if the Dad above had 128 or more overnights, the number of overnights becomes a factor in the calculation.  At 128…129…130 etc. the Dad pays a little less support with each increasing overnight.

Let’s look at a hypothetical case of parents where Dad has 127 overnights with the kids and then compare him to a Dad with 128 overnights.

“Wait” you say?  Your buddy told you, if you have the children half the time, there is no support obligation?  Nope. Tell him not to quit his day job.

Even if the parents have split custody, there will always be a child support obligation so long as one parent makes more than the other.

In fact, usually the respective incomes of the parents are not the only factors included in the guidelines.  When you put health insurance, daycare and some uninsured medical expenses into the picture a joint custody parent can have a substantial obligation to the other, even if he/she has the child(ren) half the time.

Once a parent has the above information about the sliding scale of overnights, a full out war can be waged to hit the magic 128.  Sadly, this kind of dispute can be for its own sake.  Parents exchange all sorts of topsy turvy schedules that are not logical or in the child(rens) best interest, with the sole purpose to obtain, or to avoid, hitting this magic number.

If no agreement can be reached and the parents have to take their case to court, a judge will be constrained to do the math as outlined above.  That judge will have little time or interest in cramming together a unique schedule, just to hit the magic number.   As always, reaching an agreement with the other parent is the best way to prevent injustice in the child custody and support world. 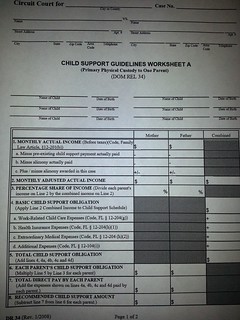